I know I've been promising an uber, and it's coming, but for now just a quick update.

I'm sending as much mojo as I can to my boy FTrain who apparently has 16k in chips at the WSOP and is currently sitting at Sam Grizzle's table. I would give my front teeth to sit at a poker table with that guy.

Lots of stuff to say but I'm going to wait. For now, enjoy this compelling article about boxing and MMA. It's going to be very interesting to see how this all shakes out.

LOS ANGELES – With two hulking bodyguards serving as bookends, Floyd “Money” Mayweather spun heads as he made each step up the Staples Center stairs.

Even among the throng of celebrities that only an NBA Finals game here can produce, the 5-foot-8, 145-pounder cast an oversized presence, undeniably an A-lister, undeniably a throwback to the days when boxing champs were such attractions.

Mayweather was leaving Game 3 of the Finals early Tuesday. It wasn’t because he had to get to bed early for a day of training for what was expected to be a mega-rematch with Oscar De La Hoya in September. He was heading into the L.A. night with a crew seven deep, the fight game no longer top of mind for the recently retired champ.

With each step, the 31-year-old, arguably the biggest star in boxing’s present, moved forward while casting doubts on boxing’s future.

In an era when fans of big-time fights have an alternative in mixed martial arts, a sport with a slew of looming super matches, how does boxing handle the loss of one of its now rare crossover stars capable of producing highly-hyped events?

While it searches for a way to salvage a marquee fight this year – Mayweather-De La Hoya II was expected to be at least the second richest fight in history – you could almost see the boxing game smarting at the sucker punch of Mayweather’s early retirement.

Where does the sport go when it’s two biggest stars are aging (De La Hoya) and retired (Mayweather); when it isn’t exciting fights that make headlines but past champs’ weight (Mike Tyson) or financial troubles (Evander Holyfield)?

Meanwhile, a couple hundred miles away in Las Vegas, Dana White, president of the Ultimate Fighting Championship, was staring at a rich array of major fights to headline his big-selling monthly pay-per-view cards.

None bigger than the possible clash of champions between welterweight Georges St. Pierre and lightweight B.J. Penn (ranked No. 2 and 3 respectively in Yahoo! Sports poll of top pound for pound MMA fighters).

White may make that the headliner of his annual New Year’s Eve card. Or maybe his Super Bowl one. Either way, it has a strong chance to be the richest pay-per-view in MMA history. It will feature two dynamic, popular fighters who show the breadth of skills that have made the sport white hot with new fans.

Whether it is White’s stable of great fighters or the high-powered Affliction promotion next month that will feature a heavyweight clash between former UFC champion Tim Sylvia and the sport’s best at that weight, Fedor Emelianenko, the headliner possibilities continue to grow in MMA.

For boxing, who knows? Just Tuesday, British welterweight Ricky Hatton turned down the chance to replace Mayweather against De La Hoya. While there are plenty of good fights out there, the biggest names, the ones that drive casual interest, appear to be floundering.

Boxing and MMA don’t have to be competitive; there ought to be room for both and each sport has its own core of fans. But the juxtaposition is striking, especially for the younger market seeking something to hook on with.

Just last month Penn used the moments after an exciting defense of his lightweight title to publicly plea with White. Penn wanted to eschew an easier title defense in lieu of a crack at a super fight with St. Pierre, a man bigger and just as skilled who defeated Penn when the latter fought as a welterweight in 2006.

The economics of the two sports drives this reality. Mayweather has made so much money (an estimated $50 million in the last 15 months alone) he can retire in his prime. Hatton got so rich off his share of the pay-per-view buys in England for his loss to Mayweather that he doesn’t have to jump at De La Hoya’s demands.

And as pathetic as Holyfield’s story has become, he did once earn enough money to buy (at least temporarily) a 109-room Georgia mansion on no less than Evander Holyfield Highway.

In MMA, no fighter is making anywhere near that kind of money. Even in the UFC, they have to fight, and keep fighting, to make a living. There is an inherent unfairness in that disparity, but it is also the reality of a growing sport.

It’s not only about better contracts for boxers. Due to the sport’s acceptance in the mainstream media, boxers can be bigger stars. It’s not just with coverage from newspapers, radio and television, De La Hoya is a first guest “Tonight Show” kind of personality.

MMA can’t get anywhere near that. While with each day that gap might close a little, no MMA champion would have attracted the attention Mayweather did Tuesday (although rookie Kimbo Slice might). None have his earning potential.

For fans, especially young ones, however, the reality of the business hardly matters.

They want fights. They want action. They want champions squaring off against each other, clashes to debate and anticipate.

One sport has its superstars begging for shots at each other, pleading for a chance to show everyone what they’ve got.

The other has them retired, relaxed and rolling out of NBA arenas, no need for boxing even if boxing may need them more now than ever.

I've been refreshing Salon nonstop for the last few days, waiting for Camille's indictment on the dems nomination race now that it's finally over.

And it's finally up.

I swear, no more politics.

Damn, I apologize yet again for my sporadic writing, but honestly, I'm overwhelmed with everything going on here at G&P headquarters.

And worse still, I feel like I'm not making any headway on things that Must Get Done.

It's an unsettling feeling.

But my Irish buddy, DB, passed along this interesting read:

I hope all the poker bloggers who made it out to Las Vegas this past weekend had a blast. Sorry to miss a Gathering but it couldn't be helped. I'll be there for the next one, have no fear.

Anyway, I just had one last political post to make. I'll be collecting my prop winnings now, thank you very much.

Ding Dong The Witch Is Dead. 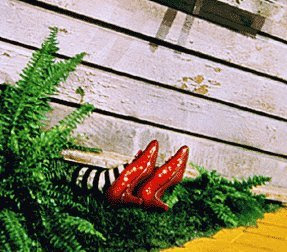