From my local paper.

Was it a good night or a bad one?

When police find you lying on a downtown sidewalk without shoes and a shirt, covered in vomit and able to only utter one word, is that the mark of a bad night – or a good one?

Police arrested Trevor McCombe, 23, of Ft. Wright, Ky., early this morning after receiving a call of a “man down.”

McCombe was wearing only white shorts, according to police and court records, and was only able to say “Blackfin,” which may or may not have referred to BlackFinn, a downtown bar and restaurant.

Police couldn’t find anyone to call in McCombe’s cell phone, and he couldn’t recall his address.

McCombe was arrested at 3:30 a.m. on a charge of disorderly conduct and is set to appear in court Friday afternoon. 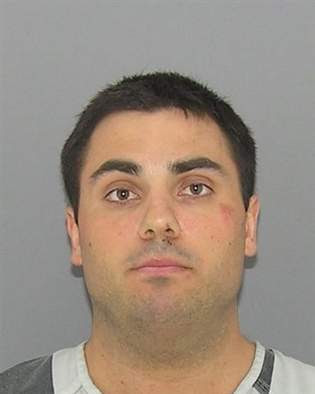 Old age sucks. Hitting 40 has made me crabby and prone to hitting bed by 10pm.

Truth be told, it's been a freaky week because apparently on Sunday, blood vessels exploded in my left eye, causing the white in my eye to turn a dark shade of cloudy deep red. It's pretty gross and frightening.

Co-workers are running away from me in abject horror. My lunch buddies refuse to eat with me unless I wear an eye-patch (solution: they chose duct tape).

I finally went to an eye specialist today who did all sorts of tests and was very surprised to find that I still have 20-20 vision.

At the end of the tedium, he told me I had two options.

He could give me some eye drops to treat my eye, and at the end of the week, it would be fine.

Or I could choose to let it heal on it's own, and at the end of seven days, it would be fine.

That being said, I chose the latter.

In honor of all those who dwell in cubes.


Read this column about Chad Johnson and my mighty Bengals.

From Paul Daugherty at the Cincinnati Enquirer.

Doc: There are no winners

Noted national sports scribe Chad Johnson has informed a breathless nation that his return to the Cincinnati Bengals is imminent.

In the latest edition of a national magazine, Johnson declares “I may be crazy, but I’m not stupid,’’ though that remains a matter of opinion. “I may come back to the Bengals as early as June,’’ he writes, ending the suspense that has been killing us like indigestion.

Come back, don’t come back. Play Hamlet in a Shakespeare festival. Juggle some balls at a circus. Whatever you do, bring your checkbook. Hamilton County would like to see you.

Since the end of last season, Johnson has owned more faces than Sybil. Maybe this latest face is as temporary as eyeliner, too. Whatever. If ever that one-word term of flip hipness described a situation, it’s this one. Chad’s coming back?

Whatever. Tell him to bring a construction company, to rebuild all the burned bridges.

Other players might have gotten advice as bad as Johnson has received from Drew Rosenhaus. None has gotten worse. Rosenhaus somehow didn’t figure Mike Brown to be resolute when dollars and sense were involved. That’s like Columbus sailing for America and hitting the beach at Ipanema.

Between them, Johnson and his agent squandered the goodwill of an entire fan base. Johnson fired on his quarterback, who spent many wasted minutes explaining/defending him. He went national with his misbegotten anger believing, I guess, that ESPN and the like would give him the exposure he craves like Big Macs.

He was exposed, all right. ESPN didn’t try to understand him, or help anyone understand who he was, where he came from or why he was behaving the way he was. ESPN just used him. He was good video.

So now, if Johnson comes back, he has gained nothing and lost things that are priceless. No doubt, Rosenhaus sold Chad on the notion that if he played out the rest of his Cincinnati contract – through 2010, with an option for 2011 – he’d be too old to get another bank-breaking deal.

No doubt, the agent filled his client’s head with the scary prospect of career-ending injury. Maybe, Chad was told his personality was too big for Cincinnati. A star such as Ocho Cinco demanded a larger stage.

Not sure what Rosenhaus told him. He doesn’t return phone calls. As befits a star, Chad’s cell phone message box was full today.

But really, all this national back and forth was about money. Johnson wasn’t happy all last year with his contract. When someone late last fall showed him USA Today’s annual player salary listings, and poked fun at him for being paid less than other wideouts of similar or lesser skills, Johnson became less pleased.

Specifically, it’s what the money represents. I’m a better player than you, why are you making more than me? The concept that newer deals are always going to be richer deals has eluded the five-time Pro Bowler and his agent. They played a high-stakes game of chicken, and by all appearances they lost.

But what have the Bengals won?

They can praise themselves for their resolve. They can say they avoided setting a precedent of unhappy players getting their way. Owners around the league think Mike Brown is a jolly good fellow for standing up to Rosenhaus.

All it cost the Bengals was, quite possibly, a season of harmony. The team can make it clear to Johnson that if he doesn’t repent, he’ll sit on the bench. The Bengals have cleared a path for that, with the draft and Marvin Lewis’ tough talk.

Coaches and teammates can urge Johnson to zip it, play great and let the chips fall. Everyone can (and will) try to put the happiest face possible on this. We know better.

Chad Johnson, always a narcissist, now will be a narcissist with a cause. And the Bengals are too cheap to hire a team shrink.

The Bengals should concern themselves with setting another precedent: Making the organization a place where players want to stay, not leave. Other owners are happy a line was drawn in the dollars. Now, they don’t have to. The Bengals should concern themselves with winning more games, not bearing standards. That’ll happen the day Johnson stops talking.

Meantime, Johnson believes this, according to his piece in the magazine:

“I am what some people would say is the face of Cincinnati.’’

So alas, I'm too burnt out to uber it up. Hopefully tomorrow.

Some friends are pinging me, telling me that Obama has clinched but I don't buy it. I'm gonna stay the cynic and wait for things to shake out.

Moving quickly along to poker, there's a ton of WSOP news out there, but frankly and hopefully without offending any of my friends writing at other poker sites, I'm only reading Pauly. I can't tell you how much I'm enjoying his take on the whole poker scene without the pressure of reporting chip stacks and all that crap. Kudos to him for doing things his way this year. Pure Pauly rules.

Another segue: MMAjunkie.com received a pretty cool NY Times link from the sports page. That's a first and shows how quickly the mainstream media is catching on to this exploding sport. Tis crazy.

But the funny thing is that the writer got a little bit of context wrong and was summarily attacked by a few MMA websites.

My favorite site quote on the whole thing?

I'm going to put that in our media kit, for sure.

Sure, MMAjunkie.com does purty good with the AP style. Plus, Dann is a news breaking stud. But to be fair, we've just hired some stellar writers to start filling out the colour pieces so expect to see some great feature columns in the very near future.

I don't know, I'm just excited and blown away by the future possibilities. As dreadful as the CBS prime time show was, it was still surreal to realize that this sport is coming on gangbusters. Let's just say I had a bit of an epiphany.

So anyway, Nielsen released the full ratings today for the broadcast and here's where things stand after the first ever MMA broadcast event:

"Caro said it best when he said that the best poker players play in the rooms where the best players don't play.

What can I say, I'm a Mike Caro disciple.

Hell, I wanted to write another mini-uber last night, but have no fear, it's coming, oh yes.

The ratings from Nielson just came out for this past weekends prime-time CBS show -- "Saturday Night Fights" -- and I'm still digesting it all. Although the real numbers won't come out until Tuesday, let's just say that they are surprisingly good.

Lord knows I could write a massive missive about the emerging popularity of MMA, but I've promised myself to stick to poker on this here poker blog.

I was pretty horrified by Saturday's CBS show, but hey, if this helps grow the sport then I'll just shut my trap. I do know that MMAjunkie.com had 900 comments on the post about the fights that evening, so hell, people are obviously tuning in.

There's so much mainstream press about Kimbo and the fights, that I could literally link up 50 articles to broad sheets right now.