"Then the universe stepped on its third rail. The wand jumped convulsively as it made contact with the magic current of the world. The wand tried to jump out of the man's right hand. His left hand seemed to be frantically waving goodbye to a fish, but actually was trying to throw enough line into the rod to reduce the voltage and ease the shock of what had struck."
Norman Maclean, A River Runs Through It

While I didn't catch a lunker like Paul Maclean in the above book, I landed, for me, a fish I've been chasing for many years. A life accomplishment, if you will.

You non-fisherman/women out there may think that sounds a bit grandiose or exaggerated, but trust me, it's not.

They are also called "alligators without legs".

I've bought a boat. Upgraded my equipment/tackle to the point where anything but a muskie is going to be horsed to the boat. I have muskie fever.

Even as a kid, I was always fascinated by muskie stories in which big fish wrecked tackle and even boats. My friend at work related a story to me today that when she was a young girl and trolling on Lake Cowan with her Dad, trailing her feet in the water, that a muskie came up and savagely bit her on the foot, causing a nasty cut and an infection that landed her in the hospital for a week.

I've been fishing since I was a little kid. My Dad took me on many great fishing trips. Trout fishing in the White River of the Ozarks. Casting for imagined lunkers in the Great Tetons. Trolling by canoe in the Boundary Waters.

I suppose I could continue to wax poetic about my love for fishing but I found this superb essay by Brian Clarke in the UK Times that says it far better than I ever could:

It is the sophistication and complexity of angling that accounts in part, but only in part, for its popularity and appeal across the social spectrum. It is why angling has spawned its amazing literature: a literature that has taken in works by — among many others — Sir Robert Boyle of Boyle’s Law, Sir Humphrey Davy of the miner’s lamp, Charles Kingsley of The Water Babies, Arthur Ransome of Swallows and Amazons, President Carter of the United States, Lord Home, the former Prime Minister, and our last two poet laureates.

But there is more. Angling appeals as it does because it fascinates and absorbs at many other levels. It takes us out into Nature and deep below the surface, down into the fascinating world of water that so few others see. It beguiles and seduces, calms and electrifies, relaxing us one moment and has us hair-triggered the next. It requires artistry as well as science, field craft and dextrous skills. More profoundly it takes us back to our roots, carries us back to the forest and glade where all of us began. So anglers, concentrating anglers, are not sitting there motionless because they are bored but because they are deeply engaged and under Nature’s spell.

They will go home refreshed and fulfilled.

I've threatened many times to write up an essay about why fishing and poker are so closely related. And once I get back into writing again about my beloved game, I will.

But for now, allow me to write up my little fishing story.

The Canadian Glacier Shield is astoundingly beautiful country. Population is sparse and development is minimal. The Lodge we stayed at was located on an island on the Upper French River on a remote Indian Reservation. Again, my words can't do it justice.

It had been a few days of excellent fishing, but all pike, bass and perch thus far. We went out with the owner of the Lodge's son for a guided afternoon, where he and I commiserated and talked about our years of futile muskie hunting. I had one follow on a jerkbait but that was it.

Which leads me to one quick anecdote about the futility of muskie hunting. For my Dad's birthday a few years ago, I got him a guide on his home lake in Northern Minnesota where our family cabin is located.

The guide also spent much of his time on Lake Winnie, or Winnibigoshish, a huge lake containing world class muskie fishing. I was astounded to learn that he never fished for the beasts.

His quote to me? "To hell with that. I don't want to fish hard all the time just for the chance to possibly see a fish. I want to catch them, damnit."

So the next morning, Di and I had a leisurely breakfast and didn't hit the water early like usual. I recalled asking the owners son if they ever fished with swimbaits up here and he said no.

I had a few, but the one that intrigued me most was the small plastic one that looked exactly like a baby northern pike. It looked like a toy, a novelty, truth be told and I had never really thrown it.

So I ran up to the cabin and fetched it. It wasn't even in my damn tackle box.

Went to the end of a dock next to where he was cleaning out a boat and casually tossed it out and started bringing it in to show him the action and see what he thought.

If you've ever been up North to fish in Canadian waters, you know the water is very clear. You can see your lure coming in from a long ways away.

And so, literally six feet off the end of the dock, like something out of a fucking horror movie, this huge silver monstrosity appeared from nowhere, ambushed my little plastic bait, swallowing it whole with its huge jaws.

That image will forever be burned in my mind. Not only was I extraordinarily lucky to catch this damn thing, but to see it hit the lure at 100% speed isn't something I'll ever see again, I'm sure.

So I did the only logical thing a person could do in this situation. I screamed "MUSKIE!" and set the hook hard.

The owner's son instantly bolted into action, scrambling out of the boat he was cleaning out and ran to my dock, grabbing a net from the boat along the way.

Once he saw the size of the fish, however, he realized that the net he grabbed wasn't large enough to land it.

"Can you play her out here and I'll run to the boathouse for the muskie net?" he asked, already moving to the destination down at the other end of the property.

A one word answer, as my heart was beating heavily against my chest, realizing that I had to keep this thing on the line when it was so close to the dock and not one ounce of it tired.

She jumped. She made perhaps seven or eight runs, each one causing the dread and fear of losing this fish, so close, so much worse than not catching it at all, to fill my mind.

It felt like an hour, but in truth was likely five minutes of battle, to have him return and land my first 40+ inch muskie. 44 inches to be exact. Prolly 22-25 pounds.

The exaltation after getting her in the net was extraordinary. Funny to think how happy I was, and am, after closing the deal.

By this time, nearly all the kitchen help had emptied from the lodge after hearing me and the owners son hoot and holler. To say they were jealous is an underestimation of mighty size. These were guys who worked up here in the Great North for the chance at a fish just like this.

It was the largest fish ever taken from the lodge's dock in the 20 years of current ownership. Click on this for a larger version. 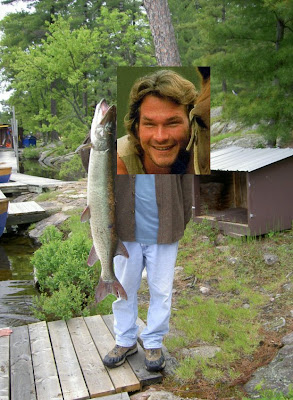 As a side note, the muskie shredded my lure, slicing it in three places with her teeth, rendering it useless.

We quickly got her unhooked, had a few pics taken and released her. It's all about the catch and release, baby!! She sulked by the dock for a few minutes, allowing some of the latecomers from the lodge to see her in all her glory. A beautiful animal.

And that was that.

And so I apologize for the long, self-indulgent post. In some small way, I hope it's better than no post at all.

And I'm not even going to mention the bugs. It's almost science-fiction. You just simply can't believe there's this many and you're pretty sure you're going to go mad.

So allow me to leave you with a horrific tale that was the end of my trip. The final night, packing up our gear, I had an accident that occurred in the blink of an eye, leaving a fishing hook deeply embedded in my finger, way past the barb.

And we are in remote fucking country. I was sweating bullets that first five minutes trying to figure a way out of this situation that didn't entail me just ripping the lure out of my hand, along with a huge chunk of flesh.

After unsuccessfully trying to get the offending hook disengaged, I was forced to make my way to the lodge and see if they could help. I wouldn't let my wife come because who wants to see a grown man cry?

There were a good 8 guys in there when I entered. And they were repulsed, sickened, and simultaneously ecstatic it wasn't them in this tricky situation.

The owner, who had been drinking, summoned his son and sous chef for the impending surgery. He prepped me by proffering large glasses of vodka, which I happily accepted, as they prepared by laying out towels and readying the wire cutters.

Before we began, but for the young makeshift surgeons, the entire room of men left, too weak of stomach to witness my looming ordeal. Pansies.

The only plan of action was to shove/force the hook point back through my finger, exposing the barb. They could then cut the barb off with the wire cutters and slide the hook back out.

Holy hell. I asked for another drink and ended up drinking three.

It gets even worse. My skin was so tough that the hook point wouldn't pierce -- the skin on my finger tented, forcing the one guy to press hard down on the skin on either side to force the hook through.

Holy hell. I drank three more drinks after the procedure was done.

The owner of the Lodge laughed, saying that after my muskie catch and the embedded lure in the finger, that they would be telling some stories about me for quite awhile.

I don't doubt it.