These tournaments are too much damn fun.

Let's do ONE final WSOP satellite tourney, shall we?

Open to all. This counts for the WPBT, as well.

This Sunday night!
Join Bob, Russell and Wes in the WSOP!

Another hilarious evening of chat and hammers being dropped left and right. Thanks again to all who participated.

Hit Pauly for the best of WPBT tourney writeups.

Congrats to Wes at BigPirate. He now joins Bob and Russell in the WSOP.

The final 6, in order of finish:

Note: per the chop that was agreed upon - I'm waiting to hear from Noble on whether they can facilitate or we need handle amongst overselves.

And we're off!
WSOP seat time...81 players. One seat given away!

Thanks to everyone playing and good luck!

The countdown is on.

Another blogger or two (or perhaps a reader?) will be attending the WSOP in our name.
And hopefully, poker infamy.

And our blogger gathering is growing close. 3 weeks and counting.

CJ and AL have made an announcement pertaining to an after WBPT tourney Bash. Damn, look at the list of all the bloggers attending this sordid event. FYI: I have not bought tickets yet. I am also quite sure I will miss any tournament that begins at 10 AM. I wonder if I can find a punctual dwarf for this one?
WPBT Bash

Hopefully we'll hit 100 players and give two seats away tonite.
Sign up now. It's gonna be fun, per always.

First, Prof has a Freeroll tournament tonight (Tuesday, May 10th) on Noble Poker, at 9:00pm EST. Consider it a warm-up for tommorrow evening. Come play. I'll be there with what looks to be an impressive contingent of bloggers.

Secondly, due to circumstances beyond my control, our WSOP tournament tommorrow will be capped at 100 players. We have 41 signed up right now.

So sign up NOW, damnit, if you want to play. Seats are limited and gonna go fast.

Why is this? Because of the unique structure of the payout for a WSOP seat for this tournament, their software is only allowing players to sign up in 50 player increments of minimum and max. Insane. That means for the 150 players, we'd need to hit a minimum of 100 players to avoid the tournament being cancelled, which is unacceptable, imho. Despite my gambling nature, I'm not willing to roll the dice that we'll hit that 100 player minimum, despite the fact we always have a ton of last-second signups.

Believe me, I'm as bummed as anyone else. Bummed is too tepid a word.
This is wonderful timing, as they say.

So please accept my apologies - I'm working on it, but for now, assume we're playing for TWO WSOP seats, if we hit the 100 player mark.


I don't even know what to say.
I had such a great freaking time this weekend hanging with Dr. Pauly and SnailTrax.
Epic Good Times.

But I return to some Craziness in the Blogosphere.
And for now I'm just going to point to Otis's excellent post. The comments are mighty interesting reading, too.
Money and thieves

I missed some good blogging stuff over the weekend apparently.
I received a funny email from the police in South Dakota yesterday.
Yes, about poker blogs.
That's a first.

At least the thief removed all the RSS feeds from poker blogs.
Well done, Maudie. You're officially the pitbull of the poker bloggers.

The funny thing is that my feed wasn't even being used (at the time) but I still felt protective of all the blogs that were being ripped off. It's not the first time (and won't be the last) that I've battled these slugs. It's just the damn principle.

I try to embrace every new blogger into our little corner of the web because I've always felt we should be inclusive rather than exclusive. But I'm equally diligent when someone tries to exploit the aggregate content by creating these shitty parasitic sites.

Hopefully this affair blows over quickly because, quite frankly, after spending time with Pauly, discussing 'blogging' and everything that goes along with it, I was inspired. As many of you know, Pauly has an incredibly generous spirit when sharing his thoughts on writing. He truly gave me some things to think about this weekend, and for that I'm indebted.

The friendships I've lucked into through this silly blog still astound me. I'm a lucky mofo.

Hit Pauly's poker blog for his stellar travelogue writeups. Nobody does it better than Dr. Pauly.

We hooked up with Pauly and SnailTrax at the Reds game on Saturday. The Reds won for the first time in 30 days and we had a great time hanging out with The SnailTrax crew, including his hilarious Dad. It's easy to see where Daddy got his advanced sense of humour.

The highlight during the game was poking the boys and saying slowly, "Damn, look up there at the JumboTron."

Pauly, always on top of things, quickly whipped out his digital camera he had hidden away and snapped a shot. Stolen content from the Tao of Poker: 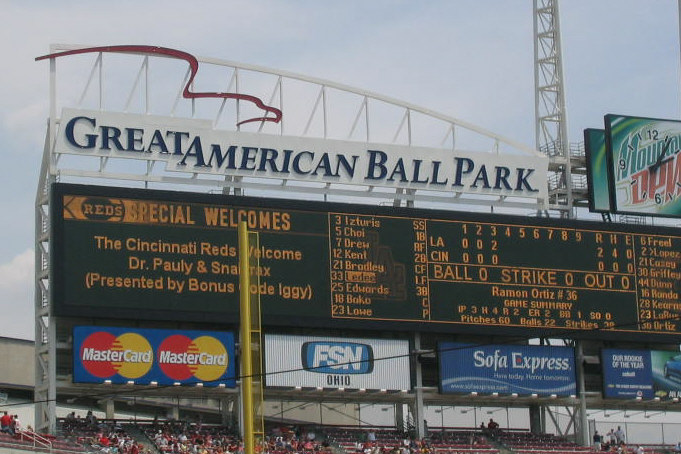 Goddamn, I had a great time this weekend. And you know what, I'm not even gonna blog about it. I feel ill-equipped. Besides, this was Pauly's trip - I'm just a lucky goofball who got to hang a bit with the madness that is SnailTrax and the Doctor. And I loved every second of it. My only concern is that photo Pauly snapped of me dancing at the Reds game.

Thanks, Pauly and Matty.
It was beyond fun.
My buddies had way too much fun meeting and partying with you.
Again, stay tuned for Pauly's legendary travel writeups.

And a shout-out to Jeff and UWannaBet who showed up for the poker game on Sunday. Hope you guys had fun. :)

And a special thanks to AlCanHang for the Dial-A-Shots. Not to mention all the bloggers from around the globe who called Pauly on his cell during the game and wished me happy birthday. Too damn cool.

And I found this funny post from Fred about why you should sign up on Noble Poker with this humble poker blog.

Guinness & Poker can be an irritating blog to visit, with those flashing banners, unrelenting shilling for bonus codes this and Poker Tracker that, wholesale quoting of stuff, and Iggy’s refusal to follow anything like the normal protocols of blogging such as separate, short, headlined posts that could be easily located again rather than the scrolling screeds he puts up.

But having said all that, I’ll note that I visit G&P on a near-daily basis. It’s a pretty good barometer of the state of poker, and especially the state of on-line poker, plus it saves me the trouble of reading RGP, which has as bad a noise-to-signal ratio as rec.music.dylan.

Iggy’s links to other poker blogs have led me to some excellent writing, at least one of which – Maudie’s – ended up on my permanent reading list. Needless to say, but I'll say it anyway, at least two people are going to the WSOP who wouldn't have been if not for Iggy's initial idea and tireless flogging. And Iggy, when he wants to, can come up with some excellent funny, original material, such as his trip to Aruba post and his wonderful post on the infamous “Fast Eddie.” You can find both by searching his site if you're interested.

All reasons, as I said, why I read G&P almost every day. So, I was driving up to Maine yesterday, listening to NPR, which was in one of its cyclic fund-raising campaigns, and the announcers were doing the whole "you pay for your newspaper, you pay for your Starbucks coffee, why do you think you should get a free ride from us?" guilt-trip gig. Answer, of course, is the same as why dogs like to orally clean their genitals, but that’s neither here nor there. They’re right, and every now and then I do make a donation because I use their services regularly, it’s near-impossible to listen to commercial radio, I’d miss them if they were gone, and they should make a buck from me.

They should make a buck from me. As should Iggy, for all he does for the poker blogger community. So, I’m using the little sign-up link that will let Iggy get some street cred and a few bonus dollars at Noble, and may he spend them in good health.

In the Big Scheme of Things, fhb is a very small fish in the poker blogger ocean, but if you’re a poker blogger/reader and you’re dithering about whether you want to go to the hassle of opening another account at yet another site and have somehow stumbled on this, think about what I’ve said.

See you on Wednesday. And thank you, Iggy.

Nope, thank you, Sir. You said it far better than I ever could.


One WSOP seat given away for every 50 players.

As extra incentive to sign up with this harried blogger, Noble is offering a 100% deposit bonus up to $500 with my links. It's usually only $300, but because they humped my leg so hard, they decided to make a special offer and allow my readers to get an extra bounty on their deposit.

Sleep-deprived but alive, I just got home from the whirlwind weekend appearance of Dr. Pauly and SnailTrax to our fair city. What a fucking blast. I'm just lucky that Trey was playing here and I had the opportunity to hang with these two legendary guys.

I'll be back with a short recap once I regain my bearings.

Tournament limited to the first 150 players who sign up.
If we hit 150 players: that's THREE WSOP seats we will be giving away.

One WSOP seat given away for every 50 players.

As extra incentive to sign up with this harried blogger, Noble is offering a 100% deposit bonus up to $500 with my links. It's usually only $300, but because they humped my leg so hard, they decided to make a special offer and allow my readers to get an extra bounty on their deposit.

Bleh, I know most folks already have an account there but for those of you who don't, please consider using my links. And my humble apologies for anyone I put off with my shilling.