In case you missed it. Here is the Washington Post's Mensa Invitational which once again asked readers to take any word from the dictionary, alter it by adding, subtracting, or changing one letter, and supply a new definition.

Of course, for us old folks, these were called sniglets back in the day. Where the hell did Rich Hall go, anyway?

Here are the winners:

1. Cashtration (n.): The act of buying a house, which renders the subject financially impotent for an indefinite period of time.

2. Ignoranus: A person who's both stupid and an asshole.

3. Intaxicaton: Euphoria at getting a tax refund, which lasts until you realize it was your money to start with.

4. Reintarnation: Coming back to life as a hillbilly.

5. Bozone ( n.): The substance surrounding stupid people that stops bright ideas from penetrating. The bozone layer, unfortunately, shows little sign of breaking down in the near future.

6. Foreploy: Any misrepresentation about yourself for the purpose of getting laid.

8. Sarchasm: The gulf between the author of sarcastic wit and the person who doesn't get it.

9. Inoculatte: To take coffee intravenously when you are running late.

10. Osteopornosis: A degenerate disease. (This one got extra credit.)

The Washington Post has also published the winning submissions to its yearly contest, in which readers are asked to supply alternate meanings for common words. And the winners are:

1. Coffee, n. The person upon whom one coughs.

2. Flabbergasted, adj. Appalled by discovering how much weight one has gained.

3. Abdicate, v. To give up all hope of ever having a flat stomach.

4. Esplanade, v. To attempt an explanation while drunk.

6. Negligent, adj. Absentmindedly answering the door when wearing only a nightgown.

9. Flatulence, n. Emergency vehicle that picks up someone who has been run over by a steamroller.

11. Testicle, n. A humorous question on an exam.

14. Oyster, n. A person who sprinkles his conversation with Yiddishisms.

15. Frisbeetarianism, n. The belief that, after death, the soul flies up onto the roof and gets stuck there.

16. Circumvent, n. An opening in the front of boxer shorts worn by Jewish men.

Semi-old news but I feel compelled to post it because of my love for Party Poker.

The founder and software maker of the popular online gaming site, PartyGaming, has pleaded guilty to illegal internet gambling and will pay $300 million in fines.

Anurag Dikshit, the former director of Gibraltar-based PartyGaming, has agreed to cooperate with authorities probing the web-based gambling scene. It's illegal to allow those on American soil to access online wagering sites.

Under a deal with prosecutors, Dikshit faces a maximum two years behind bars under his Tuesday guilty plea to one count of violating the Wire Act.

The 37-year-old Dikshit is a resident of the United Kingdom and Gibraltar. He traveled to New York where he pleaded guilty Monday in federal court. He is one of several operators and marketers of internet gambling concerns facing federal prosecution.

Specifically, Dikshit pleaded guilty to one count of using the wires to transmit bets and wagering information in interstate commerce.

The Unlawful Internet Gambling Enforcement Act of 2006 also prohibits credit-card companies from collecting payments for bets. Under rules adopted last month by the U.S. Treasury and Federal Reserve, financial companies have until Dec. 1, 2009 to "establish and implement policies and procedures that are reasonably designed to prevent payments to gambling businesses in connection with unlawful internet gambling."

PartyGaming has stopped taking wagers from its estimated 900,000 U.S. players of poker, blackjack, roulette and other games of chance.

Ahh, what fun this past weekend was. Fifth year of hilarity with my fellow poker bloggers. But I'm mired in post-Vegas depression so I'm going to keep this quick.

Thursday and Friday night shenanigans at the bar and poker table. Gracie and Sweet Sweet Pablo getting married on Saturday, graciously sharing it with us. Blogger tourney later in the day followed by hilarity at the Geisha Bar that night/morning. Sunday sportsbook action.

So for now, I'm going to run through the links over there on the right in my blogroll and see if I can't catch some trip reports.

I'm going to share this wonderful photo of the dealertainment guy, Freddy Mercury, putting on one heckuva show as AlCantHang shows his approval. 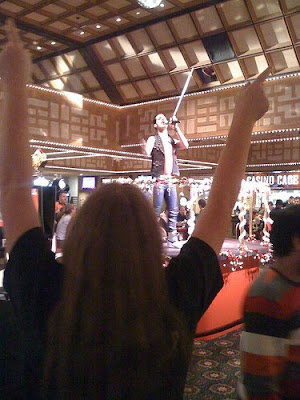