Well hell, a reader sent me this article about the Neteller insanity from USA Today so I figgered I'd share it here.

SAN FRANCISCO — Payday has finally come for hundreds of thousands of U.S. customers whose money has been tied up for months in a beleaguered Internet money-transfer service popular among gamblers.

Under a deal reached with the U.S. Attorney's office in Manhattan last month, Neteller has begun to allow consumers access to their accounts following a months-long federal investigation.

So far, $70 million has been withdrawn.

The resolution of the longstanding case — watched closely in the gaming industry — could have far-reaching implications for consumers and law-enforcement officials trying to muzzle online gambling, which is illegal.

For U.S. customers, it's been a frenzied period for cashing out. Many, including Mark Kundinger, withdrew money — in his case, $4,900 — the first day. "When I got my money back, it felt as if I had won the jackpot in a weird way," says Kundinger, 32, of California.

Some 250,000 accounts with positive balances had been frozen since January, when Neteller halted operations in the USA after authorities arrested its Canadian founders, charging them with handling billions of dollars in illegal gambling proceeds. About two-thirds of Neteller's business came from the USA.

The company still does business in 160 countries. It's considering re-entering the U.S. market in non-gaming areas, Neteller spokesman Andrew Gilchrist says. During the federal probe of Neteller, FBI agent Neil Donovan said, funds were held in court as potential evidence.

The investigation is a big part of a nationwide crackdown against online gambling. A law signed by President Bush in October bans the use of credit cards, checks and electronic fund transfers for Internet gaming. Still, U.S. residents place more than half of all bets to major offshore casinos in an estimated $16.3 billion industry. However, most online gaming sites are based offshore, outside the reach of American law enforcement.

Neteller was the de facto payment processor for gambling transactions after PayPal dropped out of the U.S. gambling market in 2003 as part of a settlement with the federal government. PayPal, which is owned by eBay (EBAY), offers payment services for gaming where it is legal, such as in Europe.

Money-transfer companies such as Neteller do business with financial institutions and merchants. But many also allow gambling companies to transfer money collected from U.S. gamblers to bank accounts outside the USA.

The feds' actions against Neteller have had the desired effect of forcing other payment processors, such as InstaDebit Services and Citadel Commerce, from the U.S. market.

Whether this deters Americans from making wagers online is another matter, industry experts say. Many will continue to use other payment-processing systems, money orders and cashier's checks. "It is a temporary setback for online gamblers," says Joseph Kelly, a professor at SUNY College at Buffalo. "People who are determined to play will find creative ways to bet."

A conspiracy charge against Neteller, which is publicly traded in London, will be dismissed after two years if it meets the conditions of its agreement. One condition is freeing up the funds of consumers caught in the cross hairs of the probe. Neteller must forfeit $136 million, restore the $94 million in the accounts of U.S. residents, and admit to violating U.S. law, according to the deal.

Neteller's co-founders, Stephen Lawrence and John Lefebvre, have pleaded guilty to a charge of conspiracy to transfer funds with the intent to promote illegal gambling. They each face up to five years in prison on the charge.

"Our highest priority is to get funds back" to U.S. customers, Neteller CEO Ron Martin said in a video posted July 31 on YouTube. He said $40 million was withdrawn on the program's first day, July 30.

"Some of our largest customers were among the early withdrawers," Neteller's Gilchrist said in an e-mail message to USA TODAY.

Neteller has notified U.S. members via e-mail, instructing them to sign onto their accounts at neteller.com to withdraw funds.

Customers can receive their money through an electronic transfer to their bank account or by check to their mailing address. Most are opting for the transfer, which takes about a day. The deadline for withdrawals is Jan. 26, according to Neteller's website.

Neteller customers also are receiving a waiver release, in which they and Neteller agree not to sue each other, say customers who e-mailed copies of the release to USA TODAY.

Dan Smith, 47, of Pennsylvania, collected nearly $40,000 from his account July 30. After months of waiting, he was eager to close his account, he says.

Unlike a handful of other Neteller customers interviewed, Smith and Kundinger did not object to use of their names in this article. They say they aren't concerned about criminal charges. Nor should they be, says a former federal prosecutor.

"As a general matter, the federal government's interest is in going after the bookmaker instead of the gambler," says Joseph DeMarco, an Internet and privacy attorney who used to be assistant U.S. Attorney in Manhattan.

Happiness is coming home from vacation and finding a Neteller check in your mailbox for money that you considered lost.

Happiness is also nearly breaking the Minnesota state record for a smallmouth bass. 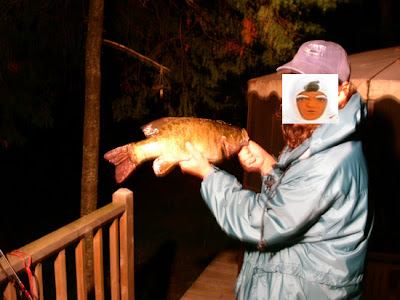 This is a terrible angle in this photo, but the fish is nearly 23 inches long and weighed in at 7lbs. The state record is 8 lbs even.

For my dad's birthday, I had hired a guide to take us out fishing. We were jigging on the backside of Drumbeater Island when this monster hit. I thought I had a bigass northern, initially, until he jumped.

At that point, our guide started getting very excited.

When I finally boated the fish, our guide nearly pooped his pants, claiming it was the biggest smallie he'd ever seen taken out of a Minnesota lake. Long story short, I'm getting the fish mounted, against my catch and release judgement.

I realize fishing stories rank right up there with bad beat stories, but hey, I'll never catch a smallie this big ever again.

Edit: Just learned that John from Cincinnati has been cancelled. Damnit.

I don't know Butchie instead.