Been reading a little about movement around the UIGEA. Looks like the Treasury pushed the effective date of the new rules to Dec. 1, 2009. I'll have more to write on this in a day or two.

This has been a long crazy week.

Next week should prove to be the same. I fly out next Thursday to Costa Rica to play in the Latin Series of Poker. If anyone knows anything about this tourney or even tips on Costa Rica, please feel free to let me know.

For now, allow me to leave you with this incredible photo from the Canadian Rockies. Specifically Lake Morain. Looks like one hellva place to go canoeing. 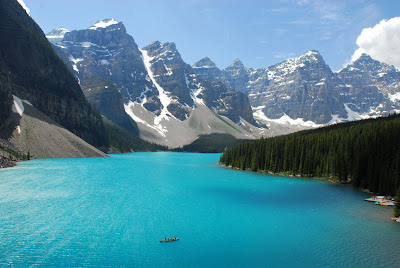 Well hell, a hearty congrats to 2008 WSOP champ and my day one nemesis, Peter Eastgate.

It's cool to have played (and gotten my ass kicked) by the world champ for all that time.

Actually it's more humbling than cool, but why split hairs?

I still wish I had called him in that damn big hand. Top pair sucks on a connected board.

In reading about Obama's new chief of staff, Rahm Emanuel, I learned a new word that he likes to use.

He uses it as a reference to congressman, but I think there's gotta be a way to work this into the poker vernacular. Give me time.

And in the Life is Strange Department here at Guinness and Poker, I just got offered to be flown in to play in the Latin Series of Poker in Costa Rica.

Wow. After 15 hours, they are down to two poker players, both Euro's.

And one of them has my damn chips from Day One.

It's interesting that the guy who left the most indelible impression on me from my time at the tables is one of two left, and with the chip lead. I guess my read was correct.

Looking forward to the battle tonight.

Quick PSA here at G&P from a local friend and blogger:

I have a buddy that started up the site fulltiltforum.com who's having some issues with medical bills due to his fight with ALS - the same kidney disease as Jen Harman. I have managed to get Andy Bloch, who also knows Roger, to agree to host a tourney on FT this Wednesday night, November 12th. It is a $10+10 tourney.

Cat is the guy with kidney failure, and the PW is posted in the lobby as well.

Thanks for your help!

Video of the day:

Crikey, I nearly forgot today was the day. Where the hell is the hype? The pomp and circumstance? The media push?

I guess scheduling the final table so close to one of the biggest elections in history didn't really work out so well. Whoda thunk?

And why can't I watch this damn thing live in it's entirety?

I know Pauly and Otis are there so I'll have to be content with checking in with them for updates.

I'll be rooting for Dennis Phillips mostly, as he's from my home town of St. Louis, and as the elder statesman, would likely be the best ambassador for poker of the nine.

Next on my list is Peter Eastgate, the Dane that I played with for ten hours on Day One of the event. In my four days of play there, there's only one hand that I'm still stinging a little from. And, of course, it was with him. We played a pretty big pot and he made a massive bet on the river to which I capitulated and folded, leaving me with only 11k, the lowest point of the tourney for me. I still wish I had called, damnit.

Ylon Schwartz seems like quite the character, as does Chino. I love Craig Marquis for verbally bitchslapping Tiffany Michelle on TV and on 2+2. The Russian kid, Ivan Demidov, is obviously a monster player and lots of folks are picking him.

And my partner over at MMAjunkie.com, Eric Foster, was picked by Eric Lynch to head to Atlanta to Mathew Hilger's place to help Darus Suharto practice and run table simulations/situations. And that's all I can really say about that for now. Cool stuff.

And so today is the day. It sure feels anticlimactic to me, but hell, I'm just bitter I'm not there.

Next year seems so far away.

It's too bad I never posted my full WSOP trip report but I'll be happy to discuss at the bar in Vegas in a month.

I'll even recount why John Dagostino cussed at me before getting knocked out at my table.

One quick note per the elections. PaddyPower has already posted odds on the 2012 presidential election. Ridiculous but fun: